Get GitOps off the ground and prepare fo... 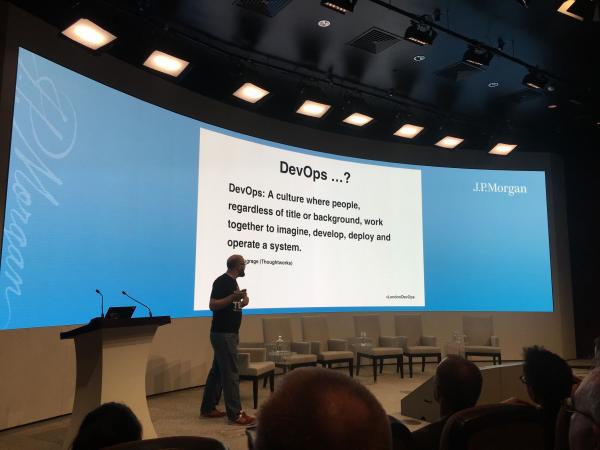 The DevOps approach: mind over matter

The evening kicked off with a talk by Kevin Cameron, Executive Director, J.P. Morgan Chase, who outlined the fundamental importance of driving cultural change when embarking on a DevOps journey. He explained how embedding DevOps in the workplace must focus on a shift in mindset towards more collaborative and open ways of working, rather than deploying myriad DevOps tools.

"We believe we have to try to change the mindset first," Kevin explained. "We found that many teams went straight for the tools, or did their own deployments and thus considered themselves to be 'DevOps'. But that's not how it works — you need to get the mindset across the organisation, and you need to do it at grassroots".

His advice to those looking to leverage DevOps approaches was to start small, bring in some successful projects, and then scale up. Kevin also stressed the importance of ring-fencing time for continuous learning when transforming to an innovation-driven culture.

He also offered advice for improving the software delivery process, explaining that honestly mapping out your current position will give a realistic view of the end-to-end process — from the business requirements of a project right through to delivery. This exercise was a real eye-opener for J.P. Morgan Chase, he continued, as it enabled teams to better understand the handoffs across their relatively siloed organisation. While largely efficient, these added significant delays to projects, highlighting an area where groups could be pulled together in a more agile way to deliver faster results.

Next to take the stage were Gary Povey and Clayton De Souza from Invesco, who shared their experiences of creating a scaled approach to agile for software development while transforming delivery with DevOps.

With existing investment in agile driving demand for greater organisational change, the business turned to DevOps and Atlassian tools — a move that has seen 60% adoption of agile techniques since the start of the year.

This achievement was not without its challenges, however, with the pair explaining that the evolution in cultural attitudes necessary posed a real challenge to an organisation of Invesco's size. In particular, moving to a culture where learning from failure is a good thing was a challenging shift, as was adopting an ethos of shared responsibility where roles and responsibilities had previously been clearly defined.

"People were stuck in their ways, but we tried to encourage, motivate and reward people to push forward with a DevOps approach," Gary explained. "We saw some great progress with people who we didn't expect to be involved. They smashed the lights out and are now leading this forward and becoming mentors for other teams."

Waterfall releases were another challenge for Gary and his team. Releases would often take place on a weekend but problems would only surface on a Monday morning when the systems involved experienced real-world use. Emergency changes or rollbacks in the worst-case scenario occurred frequently, creating a negative environment of frequent fire-fighting and resistance to further change.

Reaping the benefits of DevOps

Yet despite the challenges faced when implementing DevOps at enterprise level, both organisations demonstrated tangible and significant gains in areas like resilience engineering and risk management.

Gary explained how working in a more DevOps way has also led the team to amass significant experience in what might go wrong at deploy time. This led to the concept of the pre-mortem, where teams are able to anticipate likely failures in production and engineer around them in advance. Deploying more often makes each deployment less risky — a true indictment of a "shift left" strategy.

Other learnings around driving transformation at scale involved finding a relevant project that is both small enough to be adaptable, but also large enough to penetrate the processes and procedures of the enterprise.

Gaining buy-in from all levels of the organisation was also highlighted as crucial to any transformation initiative. This includes what was described as 'the frozen middle' — the layer of management whose day-to-day work and responsibilities must radically adapt to newer and seemingly more chaotic ways of working. 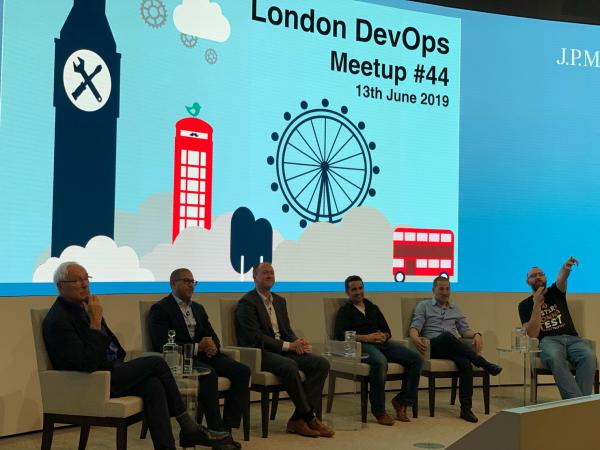 A lively panel session closed out the evening, with interaction from the audience leaving no doubt that the challenges involved in changing large regulated organisations so that they can efficiently release software are significant.

Speaking later, John Turley, Digital Transformation Consultant at Adaptavist, summarised, "It was very clear that both presenters thought people and culture were the critical pieces of any DevOps transformation. Getting that right, then complementing it with a first-class tools implementation, is the key to unlocking a successful transformation."

Successfully transforming enterprise organisations to working with DevOps methods isn't easy. But thanks to companies like J.P. Morgan Chaes and Invesco sharing their experiences of managing with their own unique challenges, it's clear that successful transformation really is achievable for everyone.

London DevOps returns on July 4th with its 45th meetup at Babylon Health.

Stay up-to-date with all of our upcoming events by joining the group:

Get GitOps off the ground and prepare for common challenges