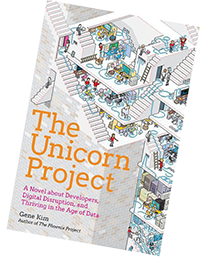 Written by Gene Kim, author of the multi-award-winning The Phoenix Project, The Unicorn Project is the new novel (yes, a novel) about developers, disruption, and how organisations need to change to thrive in the age of data and digital. So what can readers look forward to?

While The Unicorn Project was written as a standalone book, it’s also a companion novel to The Phoenix Project (which we wrote about back in 2018). Events from both novels take place concurrently at the fictional company, Parts Unlimited.

A company besieged by familiar problems

The story follows Maxine, a senior lead developer and architect, as she’s exiled to the Phoenix Project, as punishment for contributing to a payroll outage. The project, set up to modernise Parts Unlimited and enable it to compete against the e-commerce giants, is the company’s most important initiative – yet it’s besieged with problems and is now late and hugely over budget.

Maxine wrangles with an ever-growing to-do list, every lead turning into a dead end:
“Trying to get a Phoenix build going is like playing Legend of Zelda, if it were written by a sadist, forcing her to adventure far and wide to find hidden keys scattered across the kingdom and given only measly clues from uncaring NPCs.”

What’s more, the Project Phoenix team is horrified when the launch time is brought forward by senior management - with expectations of around one million people using the website and mobile apps over the coming weekend (translating to a possible 200 orders per second). Maxine is determined to bring sense to the chaos but has to battle through layers upon layers of disorganisation, bureaucracy and politics.

The Unicorn Project’s key take-aways for the enterprise

The Unicorn Project delves into the technical (and human) trials and tribulations of digital transformation today. Throughout the novel, author Gene Kim explores five “ideals” that should guide how DevOps should be applied.

In summary, DevOps can be used as a way to guide the integration of IT into the business - rather than it being a separate silo/function. Leadership teams need to increase their awareness of technology and provide efficient systems that enable developers to be productive and get fast feedback to effect change. Innovation will only thrive within a culture that embraces experimentation (and doesn't punish the initiatives that are less than 100% successful).

Ultimately, the story shows how effectiveness is driven by a consideration for the wellbeing of the humans doing the work. By creating an environment where they can thrive, and providing them with good quality data and information to understand the customer, organisations can find a way to transform and succeed. It’s fair to say that The Unicorn Project looks like a must-read book.

To get hold of your copy (and sample chapters) go to https://itrevolution.com/the-unicorn-project/.

Atlassian taking steps to become vendor of choice for DevOps

Taking digital transformation to the next level: Adaptavist acquires Go2Group