At Adaptavist, we try to do our best to look after each other.

So when Product Manager Silviya Nakova’s bike was stolen from outside our headquarters in London, it didn’t take long before the team started crowdfunding to replace it.

“Three months ago, I finally got myself the bike I was dreaming of. I was in love with it, it was my first full carbon bike,” says Siviya, “it was definitely eye catching and it got lots of stares while I was riding it.”

Silviya kept her bike locked up at home when she wasn’t using it and assumed that our yard here at Adaptavist HQ, which is watched by a security guard, would be safe to chain it in while she was in the office.

Unfortunately, a thief managed to evade the security guard, and released the bike from it’s front wheel, leaving that chained to the bike rack.

“I felt so vulnerable, robbed and alone at that moment, it was already the end of the working day and people were leaving their offices pointing at my wheel. I sat there in the security office, talking to the police, my face covered in tears, feeling hopeless and lost,” explains Silviya.

Despite the thief being caught on CCTV, police said they were unable to take the case as it was too unlikely that Silviya’s bike would be found. As the bike was so new, she hadn’t yet been able to get it insured. Silviya thought she was going to be left out of pocket and without a bike.

“I really lost my faith in humanity. How could people just pass by someone dragging a bike with one wheel out of the office? I went home on the bus that evening, it was the saddest journey ever,” she says.

But all was not lost thanks to her team mates at Adaptavist. When Silviya arrived to work the following Monday, she was greeted by a wave of supportive comments and the news that a fellow employee, Solution Consultant, Christopher Cooke had set up a GoFundMe to replace her wheels. 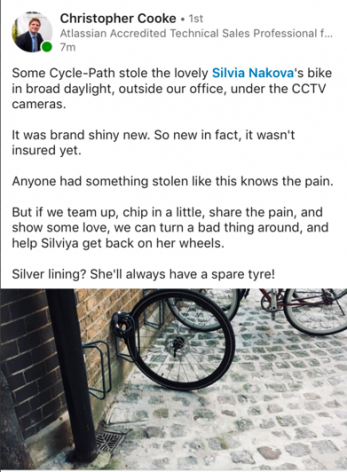 “It warmed my heart to feel the love and care of others,” says Silviya. All it took was for one employee to show some initiative and empathy to get the ball rolling and for the rest of the team to get involved and make something horrible that happened to one of our co-workers a lot better!

It only took one day for the GoFundMe to reach it’s £800 target and Silviya has now managed to replace her bike.

Want to join our team? Check out our available positions: