We sat down with the founder of ThinkNation, Lizzie Hodgson, to discuss why young people are struggling to break into the tech industry and what companies should be doing to invest in future talent.

ThinkNation is an organisation empowering young people to pursue careers in technology, the arts, business, and sport. Connecting young people, often from disadvantaged or marginalised backgrounds, with mentors and experts across a wide range of diverse industries.

Since they started in 2015, they have joined forces with over 20 other organisations to address the big tech questions of our era. A few notable people involved with their work include the MD of Accenture, Amanda Leacy, writer, filmmaker and presenter, Billie JD Porter, and rally car driver, Catie Munning.

When it comes to tech, the organisation’s goal is to break down the perceived barriers, both mental and physical, that stand between young people and tech.  One of the biggest obstacles they face is challenging the ingrained perception of tech as something separate from the everyday lives of the young people they work with and their future.

“I speak with a lot of young people who don’t know what STEM (science, technology, engineering, and mathematics) is. They don’t understand, and they have no interest in [tech] because they consider themselves as just regular people who are inheriting this world. We’ve got to find a way  to connect with them in a language that is appropriate for them,” says founder Lizzie Hodgson,“I wish that technology, as a word, didn’t exist.”

In her experience, that young people find it alienating as a concept and tech companies rely on it as a buzzword for "new and innovative", rather than trying to engage with young people about the issues that affect them. Instead, she believes that the industry needs to reach out to young people more and make tech accessible, else it will lose touch with reality. 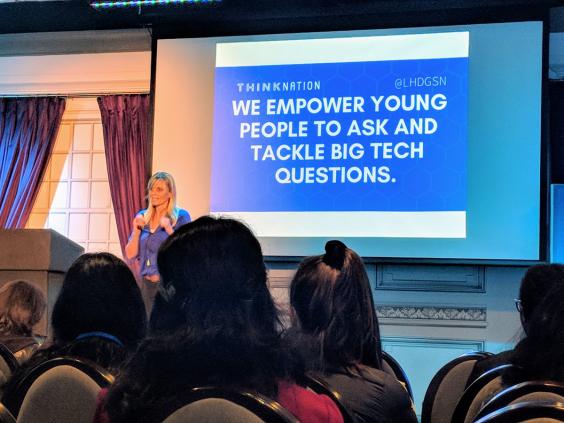 Lizzie Hodgson at Tech(K)Now in London

Lizzie says that getting young people to think creatively about tech and the impact it can have on their lives is just as important as encouraging them to sign up for a coding workshop. “Most kids play video games, download music on Soundcloud, or make short film clips on Instagram. These are all entry points to tech. Technology is vastly creative. It’s how we’re consuming all of our creative content.””

Overlooking the role of creativity in the technology industry not only alienates young people who are using it in creative ways, but also ignores one of the significant ways the industry is expanding and evolving.

“Technology is vastly creative. It’s how we’re consuming all of our creative content.”

Reaching out to young people who don't consider themselves as “techy”, like those more interested in the arts than the sciences, or who struggle at school or come from underprivileged backgrounds, can reap huge rewards for companies and the tech industry as a whole, by investing in new talent and creators with diverse skills and perspectives.

Lizzie worries that if companies fail to connect with the next generation in this way, the tech industry could become elitist and out of touch with the real needs of its users, leading to even greater inequalities than we are already experiencing today. She cites the way in which racial biases are being coded into AI as one example, as this technology is often developed and tested by groups devoid any people of colour and isubsequently only able to recognise white faces and features.

Tech giants Google, Apple, and IBM have all recently removed the need to have a degree in order to be considered for a position with them. This is a step-change welcomed by Lizzie. “We work with young people for whom getting a degree isn’t even on their radar. Not because they aren’t intelligent but because of the financial burden.”

ThinkNation has already witnessed proof that their approach works. At a workshop, young people discussed the role of tech in tackling some of the big questions such as how to tackle homelessness, mental health issues, housing, and beach pollution. While at first there was resistance to the idea that tech could be the answer to some of these by the end of the day, one group had sketched out a plan for an AI system that could help monitor and control Brighton’s notorious damp problem. A representative from an energy company happened to be in the audience for the event, and the group is now meeting with them to discuss how to take the solution forward.

“Young people are told all the time how terrible things are,” says Lizzie “We have a responsibility to instil hope in them.  If we don’t, we are all facing a problem. We’re running out of time. If we can inspire young people to have a place at the table, then that’s going to be beneficial for all of us.”

Check out our careers